Posted in: SARMs
By Holly

GW501516 (also known as GW-501,516, GW1516, GSK-516, Cardarine, and as Endurobol) is a PPARδ receptor agonist that was invented in a collaboration between Ligand Pharmaceuticals and GlaxoSmithKline in the 1990s.

It entered clinical development as a drug candidate for metabolic and cardiovascular diseases. Cardarine can help to improve stamina, endurance, and boost fat loss.

For increased endurance, Cardarine can be used to extend the oxygen intake of muscle fibres, therefore making it a great Sarm to include in your stack if you are looking to develop stamina without the extended recovery. Cardarine is often used for 6 to 8 weeks alongside a stamina conditioning work out routine. As little as 10mg per day is an effective dosage for Cardarine and is the suggested dose for a first-time cycle. 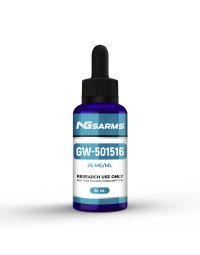